A set of cookies to collect information and report about website usage statistics without personally identifying individual visitors to Google. 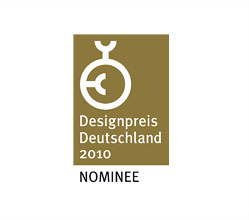 Designpreis award is official design award in Germany. It is the main action of the ministry of economy and supporting design technologies. This prize is awarded annually since 2006 for outstanding creative achievements in product design and communication. Companies can not apply for Designpreis, they are rather nominated by the Economic Ministers of the member countries. The condition for nomination is that the product has already been awarded at least one national or internationl prize. No other award does not constitute such a crude criterion for the participants. German award Designpreis is determined by many leaders in the field of design as a “prize of prizes”. Additionally, in the years 2010 and 2011, a promising young designer received a grant for young designers.